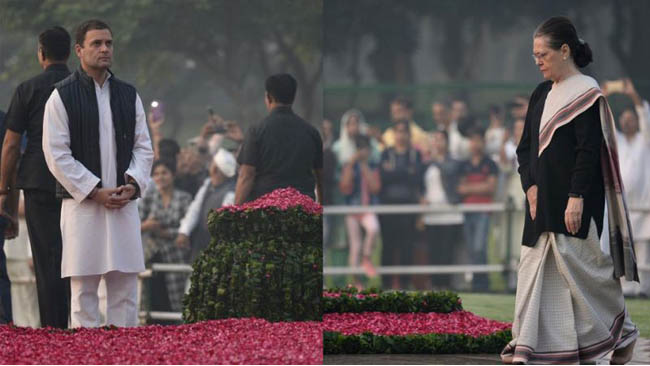 New Delhi, 31 October, 2019: Congress leaders on Thursday paid tributes to late Prime Minister Indira Gandhi on her 35th death anniversary and remembered her contribution to national security, economy and foreign policy.Congress President Sonia Gandhi, former President Pranab Mukherjee, former Vice President Hamid Ansari, former Prime Minister Manmohan Singh and Rajasthan Chief Minister Ashok Gehlot were among those who paid floral tributes to the late prime minister at a remembrance ceremony held at Shakti Sthal, her memorial. "Today we honour the incredible will & sacrifice of India's first female PM, Indira Gandhi. As PM, Mrs Gandhi made immense contributions to our nation's national security, economy, democracy & foreign policy.She will always be remembered for her love for all Indians #IndiasIndira," the Congress posted on its Twitter handle. Rahul Gandhi, who is abroad, took to Twitter to pay tributes to the former prime minister."Today is the sacrifice day of my grandmother Indira Gandhi. Learning from your steely intentions and fearless decisions, you will guide me at every step."My tributes to my grandmother & former PM, Smt Indira Gandhi Ji on the anniversary of her martyrdom," he said.Senior party leader Jairam Ramesh remembered her as the Iron Lady of India. "Oct 31st. A day of celebration. Iron Man of India, Sardar Patel's birthday. Oct 31st. A day of anguish. Iron Lady of India, Indira Gandhi's assassination. Both not only had a huge impact on our history, but on our geography as well," he wrote on the microblogging site. Gandhi, Singh, Mukherjee and Ansari and a number of other leaders first paid floral tributes to the former Prime minister at 'Shakti Sthal'.Later they visited the Indira Gandhi Memorial, the residence of the former PM where she was gunned down by her own guards on October 31, 1984, and paid homage.Mukherjee was not present at the Indira Gandhi Memorial.A small prayer meeting was also organised where devotional songs were sung.Delhi Congress chief Subhash Chopra and chairman of the Delhi Congress campaign committee Kirti Azad also paid tributes to the leader.