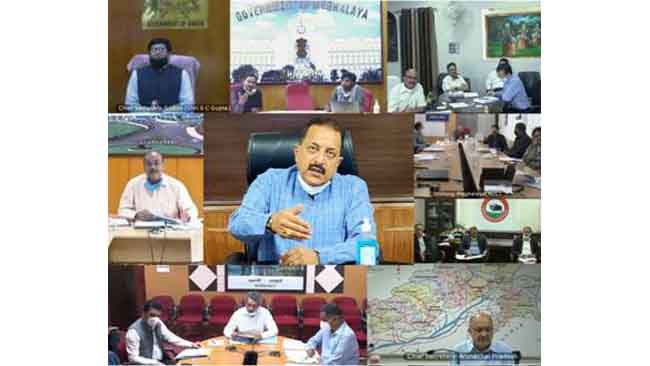 In a one-hour long video conference meeting, representatives from the governments of Arunachal Pradesh, Assam, Manipur, Meghalaya, Mizoram, Nagaland, Sikkim and Tripura provided their inputs regarding the current scenario with regard to the movements of migrant labourers and others from different parts of the country, the impact of Prime Minister’s 20 lakh crore economic package and assessment about the relaxations to be given in the days to come.

While discussing the movements of people from different parts of the country to North East, Dr Jitendra Singh said, a mechanism has been put in place to receive the list of passengers from the respective State Governments and the Ministry of DoNER coordinates with Resident Commissioners and Nodal Officers for smooth processing. He said, every request from the State Government is being seriously followed up and cited the example of yesterday when a train from Gujarat moving to Guwahati also accommodated several passengers of different States including Meghalaya.

Dr.Jitendra Singh said, one of the priorities of the Ministry of Development of North Eastern Region (DoNER) in the days to come would be to resume the work of development projects which got held up. He said an attempt would be made to put it on fast track so that the scheduled timelines could be met. In this regard, he urged upon all the State Governments to expedite submission of Utilization Certificates and other relevant documents in order to enable the North Eastern Council and DoNER Ministry to make up for the time lost in the wake of COVID pandemic and lockdown.

The Chief Secretaries also gave their assessment about the feasibility of bringing about relaxations in the respective States and different areas in the days to come. They also expressed keenness for the resumption of the held up projects.