I am focused on qualifying for Olympics: Dutee 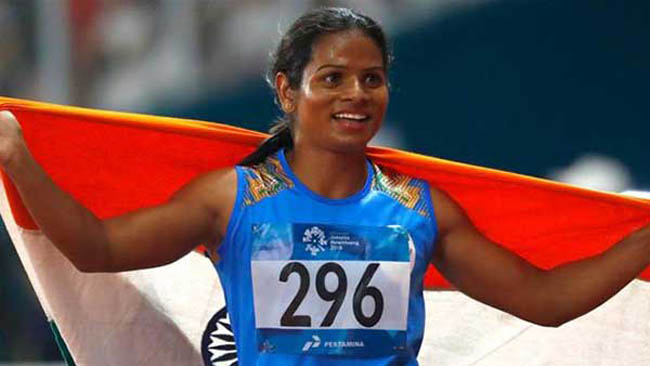 New Delhi, 17 October, 2019: Star Indian sprinter Dutee Chand on Tuesday said she is determined to further better her 100m national record and achieve the qualification standard of 11.15s for the 2020 Tokyo Olympics.

A fortnight after failing to qualify for the women's 100m semi-finals at the World Championships, Dutee completed a sprint double at the Nationals, clocking the fastest 200m time by an Indian this year, with a 23.17second burst.

The 23-year-old also shattered the 100m national record with a time of 11.22 seconds during the semi-finals on way to the gold medal in Ranchi.

"I'm very happy to score my personal best in 100m at the National open. I broke the national record. I had worked really hard and I am happy that it bore fruit. Now my target is to score 11.15 which is the qualification standard for the Olympics," Dutee told PTI.

"It is a matter of micro seconds. In 100m, the timings fluctuate. There are 6-7 months left in our hand for the Olympics. So my focus is entirely to qualify for the Tokyo Games. So I have to work hard to achieve that.

"This year's competitions are over, so I'm waiting for next year's international calender to be announced."

Talking about her feat in the 200m, Dutee said: "I'm also really happy with my performance in 200m, where I scored my personal best of 23.00 in Asian Games and here at the National open, I scored 23.17s. So overall my performance was good."

Dutee had a disappointing outing at the World Championships where she finished seventh in the heats. She clocked 11.48 seconds, well below her season-best which stands at 11.26s to finish in 37th place overall.

"My preparations for Doha World Championships was very good and that's why I could do well at the National open. I couldn't do well at Doha because of the heat there. My body couldn't adapt to the conditions," she said.

Dutee also revealed that she plans to join politics after she hangs her boots.

"I want to serve the people. Even through my sports, I have been serving the country. I want top join politics. I am still young. So I am focussing on the competitions now but once I retire I plan to do something about it," she said.