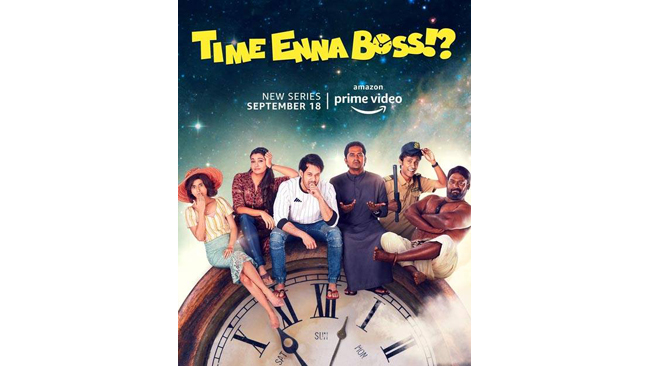 This week, Amazon Prime Video delights its viewers with the latest Indian and international entertainment across languages and genres. Binge-watch the eagerly awaited Tamil sitcom Time Enna Boss  starting September 18. Created under the banner of Kavithalayaa Productions, the 10-part series is a rib-tickling comedy revolving around an IT worker who ends up sharing his apartment with four strangers who have traveled from different time zones. The show stars Robo Shankar, Bharath, Priya Bhavani, Alexander Babu and Karunakaran.

Starting September 18, stream the International Amazon Original Documentary All in: The Fight for Democracy on Amazon Prime Video. Directed and produced by Liz Garbus and Lisa Cortés, the documentary film revolves around voter suppression making it major topic of discussion right before the American Elections.

Young customers can enjoy Peep Time S1 – the story of Shinichi Toneli (Shingo Katori), a clumsy resident of Apt. 301 whose unexpected behavior amuses his neighbor in Apt. 302.The show stars Shingo Katori, Jiro Sato, Chihiro Yamamoto in pivotal roles, and will be available on the service starting September 18.

Watch the Indian digital premiere of Holly Slept Over, a comedy-drama written and directed by debut director Joshua Friedlander. Starring Josh Lawson, Nathalie Emmanuel, Britt Lower, Erinn Hayes, and Ron Livingston, the film follows the relationship struggles of a married couple (Britt Lower and Josh Lawson) trying to conceive, their friends who have lost their spark, and the tension that ensues when an old college roommate (Nathalie Emmanuel) stays over for the weekend. Prime members in India can watch the eagerly awaited title in English, Hindi, Tamil and Telugu, starting September 18.

Appa Ani Bappais a Marathi comedy directed by Garima Dhir and Jalaj Dhir. The film stars Subodh Bhave, Sanjay Choudhary and Tushar Dalvi in pivotal roles and the story revolves around Govind Kulkarni, also known as Appa, who is a middle class man based in Pune, facing financial, family and bank struggle and asks Lord Ganesha to help him out. Viewers can stream this Comedy film from September 18.

Time Enna Boss is a Tamil sitcom that deals with the everyday adventures of an average IT guy, who ends up sharing his apartment with four random time travelers from different time periods, who accidentally get trapped in present day Chennai.

All in: The Fight for Democracy – September 18

The documentary takes a look at the history, and current activism against voter suppression; barriers to voting that most people don't even know is a threat to their basic rights as citizens of the United States.

The story follows Shinichi Toneli (Shingo Katori), a clumsy resident of Apt. 301 whose unexpected behavior amuses his nosy neighbor in Apt. 302, Jiro Kasuya. The story starts when Jiro's daughter Akane (Chihiro Yamamoto) finds out about her dad's hobby and joins him peeping through the hole to watch their neighbour’s movements.

This unconventional comedy follows the relationship struggles of a married couple trying to conceive, their friends who have lost their spark, and the tension that ensues when an old college roommate stays over for the weekend.

Govind Kulkarni, also known as, Appa (Bharat Jadhav), is a Pune-based, middle-class family man living with his wife, two children and his father. Govind faces financial, family and bank struggle and asks Lord Ganesha to help him out.