5 reasons why fans are eagerly waiting to stream TOOFAAN after watching its intriguing teaser! 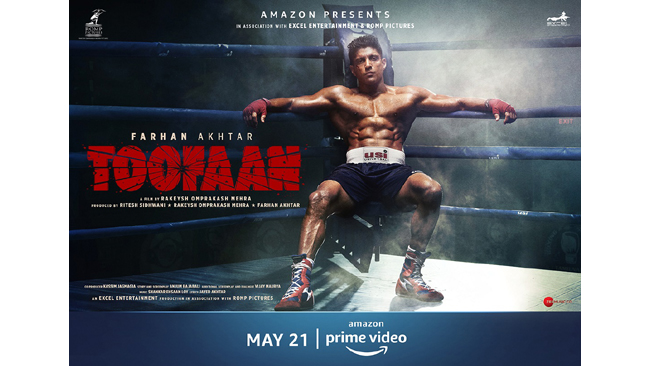 Farhan Akhtar starrer Toofaan’s teaser has been the talk of the town maintaining its position in the top 10 trending list with 16M+ views on YouTube within three days of its launch. The sports drama promises to pack a punch with aterrific screenplay, an enticing storyline and strong performances by Farhan Akhtar, Mrunal Thakur,Supriya Pathak Shah, Vijay Raaz, Hussain Dalal and Paresh Rawal. The teaser gives us glimpses from Ajju Bhai's life, played by Farhan Akhtar, and his journey in and around the boxing ring.

Here are a few reasons why we are excited for Toofaan’s world premiere on Amazon Prime Video on May 21:

The teaser highlights Farhan Akhtar, Mrunal Thakur and Paresh Rawal in prominent roles. Farhan as a hard-hitting boxer, Paresh Rawal as a coach and the classy Mrunal Thakur, this could hardly go wrong. Agree? While heir screen presence Is enough to provide a powerful sports drama, the presence of the supremely talented trio of Supriya Pathak Shah, Vijay Raaz and Hussain Dalal makes matters even more exciting.

The fantastic duo is back after close to 8 years! They were last seen working together in Bhaag Milkha Bhaag previously and had created wonders. Now that the two are back together,we can expect a perfect ‘ringside view’ of an action-packed sports drama.

Farhan Akhtar’s character transformation has left everyone awestruck. The passion with which he has portrayed his role made his character come to life. The actor was last seen playing a similar role in Bhaag Milkha Bhaag and his performance had set the bar really high for all his fans.The best thing about him is that he does not act the part, but lives it completely.

Within hours of Toofaan’s teaser launch, B-town celebs,including Priyanka Chopra Jonas, Alia Bhat, Shah Rukh Khan, Salman Khan, Hrithik Roshan, Parineeti Chopra, , Mahesh Babu and many more are have expressed their anticipation for the movie. Do make sure you watch the movie with the stars – May 21st on Amazon Prime Video.

The film has an engaging and intriguing storyline showcasing a sportsperson’s determination, dedication, and devotion.The journey is bound to encourage you to follow your passion irrespective of all odds.The teaser also promises a sipercute love story and romance between Farhan and Mrunal, increasing its entertainment quotient.

Packed with love, drama, lots of inspiration & action, Toofaan will make sure to leave you mind-blown! The film premiers on Amazon Prime Video on May 21st, 2021.