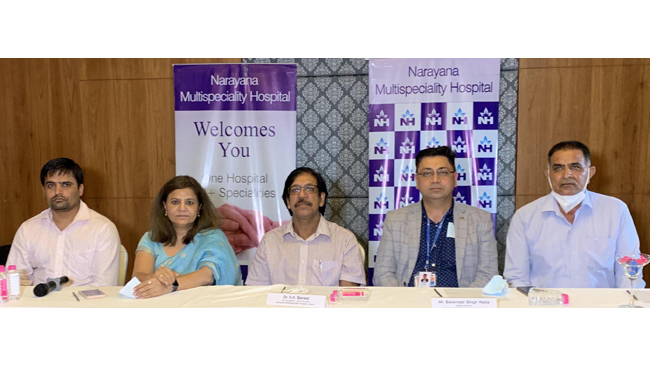 The Neuro-surgery team at Narayana Multispeciality Hospital, Jaipur led by Sr Neurosurgeon Dr KK Bansal successfully removed a brain tumor of a 57-year-old retired army havildar & current gram sevak suffering from episodes of epilepsy seizures & temporary loss of speech.  He was awake throughout and recited Gayatri Mantra as the surgery was being performed. This case follows a similar surgery done at the hospital in 2018 wherein the brain tumor of a 30-year-old computer accountant was successfully removed while he was awake and reciting Hanuman Chalisa as the surgery was being performed. Such a unique neuro-surgical procedure is known as “Awake Craniotomy” or “Awake Brain Surgery” and very few such surgeries have been reported in the country so far.

57-year-old Shri Ridhmal Ram from Churu was suffering from episodes of seizure & temporary loss of speech. Diagnostic reports confirmed Low grade Brain Tumor diagnosis in the Speech area of the Brain. The brain tumour was in such an area that there were enormous chances of loss of speech & possible paralysis upon surgery. He then came to Narayana Multispeciality Hospital; Jaipur wherein the Neuro-surgery team led by Sr. Neurosurgeon Dr. KK Bansal successfully performed the Awake Brain tumor Surgery on the patient.

Awake brain surgeries are used by select neuro-surgeons across the globe to remove tumors that are located close to areas that control vision, speech and important body movements. In the patient’s case, the tumor was in that area of the brain which controls speech. Even a slight error while performing the surgery would have led to speech impairment for life. During the surgery repeated commands were also made by the hospital’s neurology team comprising of Dr Prithvi Giri & Dr Madhuparna Paul to the patient to move his fingers, legs etc. to see if he is able to correctly listen, understand and execute the command.

“Monitoring response in a conventional brain surgery is not possible, as the patient is sedated. In awake brain surgery, the patient’s response can be continuously monitored, which helps the surgeon ascertain the exact spot without damaging other areas of the brain. In this patient’s case he was continuously asked to recite the Gayatri Mantra and move his body parts basis the command given. His responses helped us perform the surgery safely & successfully as whenever we would touch a wrong spot, his speech would get illegible” said Dr. KK Bansal, Sr. Consultant – Neuro Surgery at Narayana Multispeciality Hospital, Jaipur.

“The four-hour surgery involved the use of high-end operating microscope which can magnify the brain area. Such surgeries can be performed at very few centers across the country and requires high-end neuro-surgical expertise said Dr Mala Airun, Zonal Clinical Director at Narayana Multispeciality Hospital, Jaipur.

We are happy that we could treat the patient successfully& he can now lead a normal life” added Mr. Balwinder Walia, Facility Director at Narayana Multispeciality Hospital, Jaipur.