Shipbuilding and Ship Repair in the Arctic Discussed at SPIEF 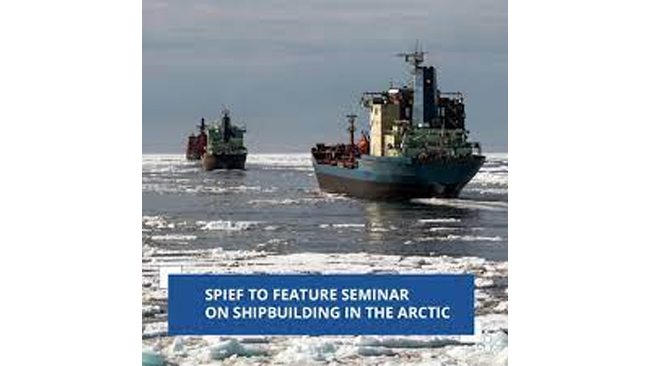 Participants of the International Seminar on Shipbuilding and Ship Repair in the Arctic, which was held as part of the St. Petersburg International Economic Forum, discussed building ships and modernizing the existing fleet for use in the polar regions. The event was part of the plan for Russia’s chairmanship of the Arctic Council and was operated by the Roscongress Foundation.

According to First Deputy Minister of the Russian Federation for the Development of the Far East and Arctic Gadzhimagomed Guseynov, one of the main challenges facing shipbuilding and ship repair is the goal set by Russian President Vladimir Putin of transporting at least 80 million tonnes of cargo along the Northern Sea Route by 2024 and 150 million tons by 2030. He stressed that volumes of this kind required large investments and the construction of a fleet.

“We are currently experiencing a shortage of ship repair facilities, especially in the Arctic and the Far East.There are a number of fundamental tasks we need to resolve here,”Guseynov said. He mentioned that there were preferential regimes in place in the region, pointing in particular to the insurance premium benefits available to company residents of the Arctic zone at 7.5%instead of the usual 30%. Income tax preferences also exist, along with the possibility of a free customs zone procedure providing 0% VAT on goods placed under the STZ procedure. However, the First Deputy Minister of the Russian Federation for the Development of the Far East and the Arctic emphasized that in addition to the existing incentives for shiprepair enterprises, 0% VAT was essential.

For one reason or another, owners preferred to have their ships repaired abroad.According to Alexey Rakhmanov, Chairman of the Management Board and CEO of the United Shipbuilding Corporation, one of the reasons is ship ownership fallingunder foreign jurisdiction. “We need to make the Russian flag convenient for shipping purposes, and this will contribute to the development of domestic ship repair,” he said. By setting VAT to zero, shipowners would stand to benefit by 20% when having their repairs carried out in Russia instead of Norway, Rakhmanov summed up.

Governor of Arkhangelsk RegionAlexander Tsybulsky noted that approximately half of all foreign ports were closed to the repair of Russian vessels, and Indonesia and Turkey had significantly increased prices for related work. “Not only are prices here becoming more competitive– we can already do the work more affordably,”Tsybulsky said.

The International Seminaron Shipbuilding and Ship Repair was also attended by EvgenyAmbrosov, Deputy Chairman of NOVATEK’s Management Board and Chairman of the Arctic Economic Council, Boris Kabakov, Director of the Department of Shipbuilding Industry and Marine Equipment of the Ministry of Industry and Trade of the Russian Federation, Olga Kuznetsova, Deputy Governor of the Murmansk Region, Vyacheslav Ruksha, Deputy General Director and Director of the Northern Sea Route Directorate of the State Atomic Energy Corporation Rosatom, and Igor Tonkovidov, General Director and Chairman of the Management Board of PAO Sovcomflot.

The development of safe shipping in the Arctic along the Northern Sea Route is a priority of the Russian Chairmanship of the Arctic Council in 2021–2023. Russia considers it important to make shipping routes in the polar regions safe as well as environmentally and economically efficient. The Russian side supports cooperation in training highly qualified maritime personnel for work in the Arctic and developing unified educational standards in this area, as well as ensuring the preparedness of rescue services and units, and developing communication and navigation facilities.