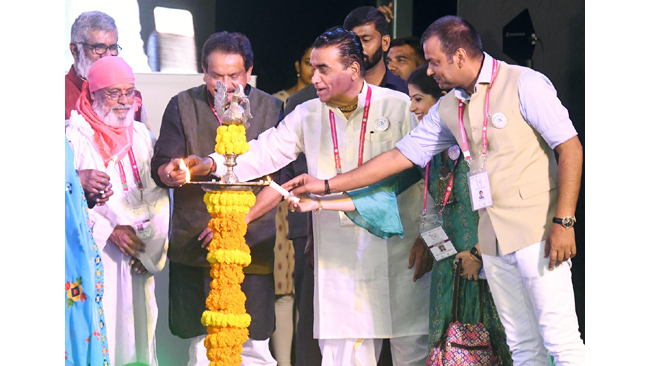 With the insight to create the visionary political thinkers of tomorrow, MIT School of Government (MIT-SOG) kick started a 3-day Annual National Conclave, Bharatiya Chhatra Sansad (Indian Student Parliament) or BCS in association with Bharatiya Chhatra Sansad Foundation from today in MIT World Peace University, Pune, Maharashtra. The event will see top political leaders and eminent personalities of the country sharing their enriching experiences and thoughts with the youth of our country from 15th Sept to 17th Sept. Known as the largest platform for the politically inclined youth of Bharat, this year’s BCS marked the 12th edition of inspiring youth and strengthening democracy.

Shri. Rahul V. Karad, Executive President, MIT World Peace University, Chief Initiator, MIT School of Government, delivered the welcome address which filled students with great enthusiasm for this mega event. The visionary Shri. Rahul V. Karad, who is also the Founder and Chief Patron of Bharatiya Chhatra Sansad, emphasised “India is the spiritual capital of the world, we have always been liberated. We Indians are original thinkers. We must practice to ‘Be the change we wish to see in the world today’. Educated people must enter politics. He also proposed that it is time for Indians to come out of colonial mindset and change the name of India to Bharat.A movement has been initiated by the BCS participants already towards this purpose. He also said that it’s also the time that the Independence Day be renamed as National day .”

Prof. S. P. Singh Baghel - Hon'ble Minister of State for Law and Justice, Govt.of India graced the inaugural ceremony as the chief guest wherein he expressed his extreme happiness on students taking such keen interest in the political system of our country.

He said, “I am happy to see that students are choosing to study political governance and are thinking about taking politics as career beyond medical, engineering and civil services. The students only can be the true change makers to build a new nation and its time to start that process now”

The day saw a lot of personalities sharing the dias with the student leaders who are coming from across the states to express their thoughts in front of this energetic crowd. Amongst them was Shri. Anant Singhania, CEO, J.K. Group of Industries and President IMC Chamber of Commerce and Industry, who talked about the sanctity of BCS being an apolitical platform.

He said, “ Delhi may be the national capital, Mumbai, the commercial capital but the Himalayan states are the ecological capital of India. Previously we were suffering from economical insecurity, now we are suffering from ecological insecurity. It is high time we understand the importance of five elements of nature and preserve mother nature. He also said that digital media has disconnected us more than connecting.”

Students welcomed Dr.Kailasavadivoo Sivan, Former Chairman, ISRO wholeheartedly.Hehailed the Indian government’s initiative for promoting space technology and infusing funds for the growth of ISRO which is highly important at this stage for our country.

The inaugural session took a musical turn with the noted classical vocalist Kaushiki Chakraborty, who mused the audience with her gifted, enthralling musical voice, which brought alive the rich traditional heritage of our motherland.

Over the past ten years, BCS has witnessed the participation of over 80,000 politically and socially inclined students and more than 300 distinguished dignitaries, guest speakers, and thought leaders.

The theme of the post-inaugural session was Freedom of speech- where to draw the line? The session was launched in the presence of eminent personalities. The session emphasizedthe principles that support the freedom of an individual or a community.

Shri Satish Mahana, Hon’ble Speaker, Uttar Pradesh Legislative Assembly hailed BCS for being the platform where the students can voice their opinion and for being able to change the views of society and addressing its apathy of students joining politics.

After this deliberation, the award of Adarsh Yuva Vidhayak was conferred upon

for being a qualified and committed person and relentlessly serving public,giving away his IIT dreams.The felicitation was done by Shri Rahul V Karad and Shri. Satish Mahana,

This was really a historic moment and a great motivation towards future youth leaders so that more qualified youths join politics.

Students also got a chance to ask the questions from these top personalities and an interactive Q&A session followed.

The day concluded with the gratitude expressed by Shri. Rahul V.Karad and Shri Vishwanath D.Karad, setting the tone for the second day.