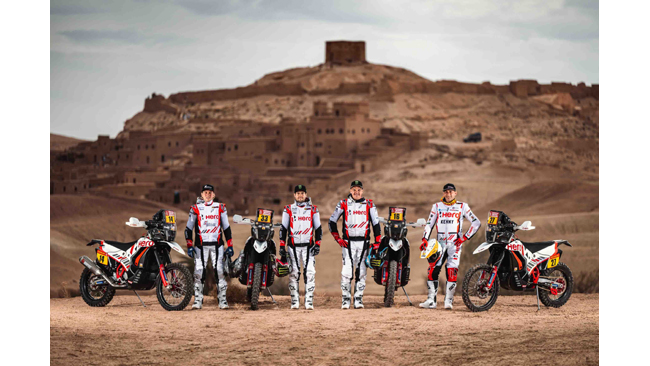 Following an unprecedented Dakar 2022 - where it became the first Indian manufacturer’s team to win a stage at the prestigious rally –2023 will be the team’s seventh consecutive appearance at the Dakar.

At Dakar 2023, the team will have a rider squad of four members –Franco Caimi, Joaquim Rodrigues, Ross Branch, and Sebastian Buhler – two of them being Dakar stage winners.

Hero MotoSports Team Rally has had consistent performancesduring the 2022 racing season. The team spent several months in training and testing around the world. Team riders Caimi and Buhler returned to racing after several months of recovery from their crashes in 2021.

This is the seventh Dakar for Joaquim Rodrigues (JRod), who won a stage at the Dakar 2022. With the team since its inception in 2016, JRod’sperformances at the inaugural season of the World Rally Raid Championship (W2RC) were consistent and he is returning to Saudi Arabia with the hopes of rewriting his success.

It will be the first Dakar for Ross Branch in Hero MotoSports Team Rally colors after coming on board in February 2022. Ross,however, is no stranger to the Dakar, having participated in the Rally on four previous occasions, and achieving a stage win in 2020. His performance in the first year with Hero MotoSports has been great, as he brought several stage wins and stage podiums for the team at various international rallies.

Caimi and Buhler missed the 2022 Dakar owing to unfortunate crashes in the last months preceding the Rally. However, they have recovered well over the year, and have put up highly competitive performances at the last few races of the W2RC 2022.

This team will take on the challenges of the Dakar in Saudi Arabia astride the Hero 450 Rally bike, which now featuresoptimizations to meet changes in the regulations - the most important of which isa new top speed limit of 160 kmph.

Dakar 2023, the fourth consecutive edition in Saudi Arabia, will run for 14 stages over 15 days – two stages more than before, and is expected to be more challenging than the previous editions. The rally kicks-off on December 31st, 2022 in Jeddah and travels inland towards Ha’il. From there the race will head south-east to cross the infamous Empty Quarter, before moving northwards to the final finish at Dammam, on 15th January, 2023. A rest day after 8 stages is the only respite that the competitors will have on this route whichtraverses over 8600 kms, of which 4700+ kms are timed sections. A total of 365 vehicles are expected to hit the start line, with 143 of them in the motorcycles category.

The 45th Dakar Rally will also be the opening race of the 2nd edition of the World Rally Raid Championship (W2RC). Hero MotoSports is a Rally GP class participant at the W2RC, and will attend its five rounds starting with the Dakar, then Abu Dhabi Desert Challenge (Feb 2023), Sonora Rally in Mexico (Apr 2023), DesafioRuta 40 in Argentina (Aug 2023), and closing the season with the Rallye du Maroc (Oct 2023).

Wolfgang Fischer, Team Manager, Hero MotoSports Team Rally said, “We have had a great year so far, and we look forward to starting the next season with a strong performance at the Dakar 2023. The team’s preparations have been good and with all four ridersin action, we are hopeful of a successful race. The bikes have been performing extremely well, and we are excited to be back for our seventh tryst with the ultimate test. I also extend my warm wishes and thanks to all our partners and fans across the world for their continued love and support.”

“The year 2022 has beenhighly rewardingfor me, having started on a high with my first Dakar stage win. The team’s performance throughout the season has been consistently improving, and we have put a lot of effort into the bike that’s going into the Dakar 2023. The team and I have been training hard for the Dakar all year, and now we are looking forward to a great month in Saudi Arabia. We are hopeful of earning many victories for myself and the team.”

“My first year with Hero MotoSports has been an exciting and rewarding one, and I am happy to have the opportunity to represent this incredible outfit at the Dakar Rally 2023. The team has been putting a lot of passion, effort and hard work into the bike. I have also been training welland feel mentally and physically fit. I’m excited for the Dakar and looking forward to some great results for the team.”

“I’m super excited to be returning to the Dakar after a gap year due to my big injury. I have recovered fully, and have been consistently improving my performance this season. We are ready for Dakar and our current momentum will prove fruitful at the Rally.”

“It has been a long year of recovery for me after my unfortunate injury in November 2021. I have been working hard to get back to shape, and be ready for the Dakar 2023. I raced at the last two rallies of the W2RC 2022 season, and this helped me recalibrate and improve my performance a lot. The aim has been to get to the Dakar in the best shape possible, and I think we’re now ready for the long month ahead.”