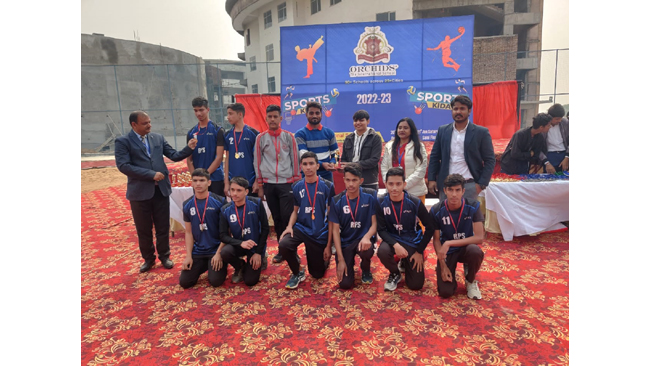 The ‘Fit India Movement’ has created a zeal for sports and a healthy lifestyle across the country, and keeping the momentum, Orchids The International School (OIS), Nevta organized the first inter-school sports competition - ‘Sports Kida’, a three-day games extravaganza from 20th to 22nd January 2022. The event was inaugurated by Arjuna award winner Shri Gopal Saini, former Indian middle-distance runner. More than 25 schools and 300 students from the city participated in the event, which was held at OIS school premises

All the events were divided into three age groups: 10 and above, 12 and above, and 14 and above. Basketball witnessed the maximum number of participants, followed by volleyball, box cricket, seven stones, taekwondo, and skating. Athletics saw some exceptional performances from the students across 100m, 200m, and 400m sprint races. Taekwondo was divided into six categories such as 20-25kgs, 26-30kgs, 31-35kgs, 36-40 kgs, 41-45kgs, 46-55 kgs, and 55 kgs & above. Skating was divided into two parts- artistic skating and speed skating with different age groups, and all the games were played with excitement, fervor, and sportsmanship.

Chief Guest and Arjuna Award winner Mr. Gopal Saini said, “I am amazed to see the amenities provided by Orchids The International School. I highly doubt that any other school has this kind of infrastructure for sports in the city. I wish good luck to all the students, and I believe they will make our country proud one day.''

Nidhi Kapoor, Principal of Orchids The International School, Nevta, said, “This is our first event in the city, and after receiving such a huge response from more than 25 schools across Jaipur, I am overwhelmed with gratitude. I congratulate all the winners and participants for being a part of this event. Most importantly, I would like to congratulate my teachers, students,  and staff members for making this event a grand success, without whom it would have been impossible to organize such a splendid event.''

Dr. Kavita Nagpal, VP of Academics, North at Orchids The International School, said, “I would like to congratulate team Nevta. We witnessed some excellent and wonderful moments during these three days. I must thank the schools and the participants for putting up some amazing performances and even creating new records. Thanks to the principal, teaching and non-teaching staff, and my dear students. Orchids The International School has always prioritized physical health, and I hope we have encouraged other schools to do the same.''

Shanaya Agarwal, a participant from Cambridge School, said, “My team has won the first position in skating 100m U-10. I just can’t express in words how happy I am. Thanks to Orchids The International School for giving us the opportunity to showcase our talents.''