Meeting of Prime Minister with Mr. Xi Jinping, President of the People's Republic of China on the margins of the 11th BRICS Summit 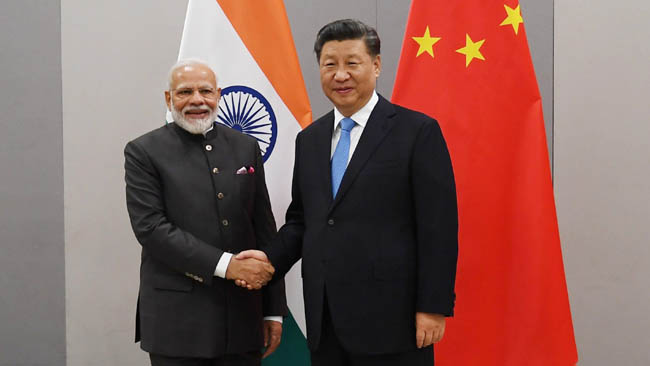 Prime Minister Shri Narendra Modi met H.E. Mr. Xi Jinping, President of the People's Republic of China on the sidelines of the 11th BRICS summit at Brasilia on 13 November 2019.
President Xi Jinping conveyed his deep appreciation to PM for hosting him at the 2nd Informal Summit in Chennai and said that he would not forget the welcome given to him by PM Modi and the people of India. He invited PM for the 3rd informal summit in China in 2020. The date and venue for which will be determined through diplomatic channels.
They both agreed on the importance of maintaining close dialogue on matters relating to trade and investment. President Xi thanked PM for India's substantial participation in the just concluded China Import Export Expo in Shanghai. The two leaders agreed that the new High Level Mechanism on Trade and Economy should meet at an early date.
The leaders reviewed preparations for celebrating the 70th anniversary of establishment of diplomatic relations between the two countries next year. They agreed that this will enhance people-to-people relations.
The leaders noted that the Special Representatives will have another meeting on matters relating to the Boundry Question and reiterated the importance of maintaining peace and security in the border areas.
The leaders also exchanged views on multilateral issues including WTO, BRICS and RCEP.