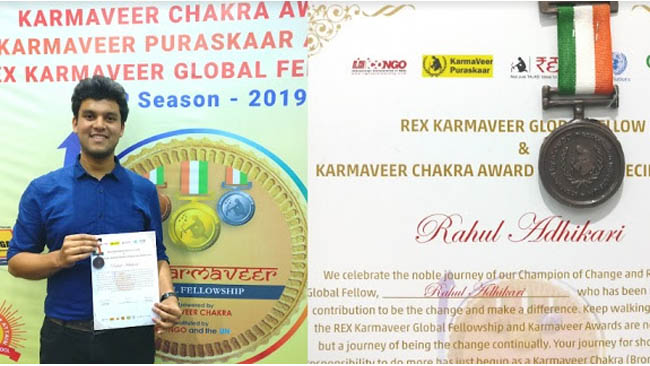 New Delhi, 28 November,2019: Rahul Adhikari, Founder of International Changemaker Olympiad & an IIT Gold-Medalist, was conferred with the prestigious Karmaveer Chakra Award and REX Karmaveer Global Fellowship at the REX CONCLiVE here in Noida on November 27 for his contributions in the education sector, and now joins the family of past awardees like Dr. Verghese Kurien (Father of White Revolution), Actor Anupam Kher (for his social work) and Mark Parkinson (renowned education change champion)

The Karmaveer Chakra Award is a National People's Award for Citizen Social Action and a global civilian honours instituted by the International Confederation of NGO (iCONGO) in partnership with the United Nations. It is given to those people across the globe who show relentless courage by walking the path less trodden and initiating a wave of change in society. The award is a tribute to the Honorable Dr. A. P. J. Abdul Kalam, 11th President of India, who had offered to be the ambassador for the awards. All the awardees are dubbed Noble Laureates.

Rahul received this award for his innovative work in the education sector to help children in schools grow up as Changemakers. Rahul founded the "International Changemaker Olympiad' (ICO) (www.ico-official.org) in 2017, which provides a platform for children in schools to launch social initiatives and solve a real-world problem in their home, school, or community, thereby making a positive difference in the world, while also developing the critical 21st-century skills of empathy, teamwork, creative problem-solving, and a Changemaker mindset while doing the same. More than 20,000 school students have participated in ICO from 20+ cities till date and launched initiatives to solve problems as varied as rehabilitating over 200 injured animals on the streets, reducing usage of 12,000 plastic straws in juice shops monthly, establishing mental health clubs in 15 schools, and saving 1 million+ litres of water by installing flow reducing devices in taps in 120 houses.

After receiving the award, Mr. Rahul shared, "It's a privilege to receive this award and great to know that others are recognising our work and the impact we have created for children in schools. There is still a long way and we will keep going to achieve our vision of every child a Changemaker."

Eitu Vij Chopra, Co-founder & Chief Curator of these awards said, "Our simple mantra is - 'I Change to Change the World' and all awardees exemplify this quality. We are very excited to have Rahul in the family and recognise his tremendous work.”

The awardees for this year represent 10+ countries from across the globe and were finalised after a rigorous selection process. These awards seek to celebrate and inspire individual citizen social responsibility, justice and action, and are held every year on the day the Indian Constitutional Pledge was signed.