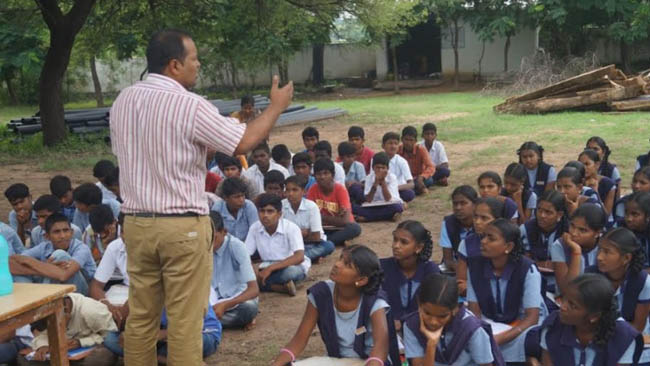 BBG Bangaru Talli Charitable Trust has organized second visit of Life Skills and Career Guidance Sessions in its adopted schools namely, ZPHS Madhurapur, ZPHS Papireddyguda, ZPHS Burgula, ZPHS Raikal, ZPHS Vityal and ZPHS Mothighanpur.As we know there are innumerable pupils from rural areas are facing a problem in choosing appropriate career paths as they lack awareness on various occupational paths. They are confronting critical challenges in designating career paths as most of their parents and guardians are deficient in literacy, so that they are unable to receive proper guidance from past generations which forces them to join undesired courses. Hence, majority of the students opt for normal courses and later plunge out due to reduced interest in that particular field. In the contemporary world there is a huge requirement and weightage for highly qualified graduations but the normal graduations are unable to cope up with the job profiles in various disciplines which hinder the nation’s development.In India according to National studies conducted by Ministry of Human Resource Development, it was recognized that only 18% of the students have preplanned career paths and became successful in accomplishing their desired professions. Remaining 82% of the students are unable to enter into their desired sector which leads to decreased productivity. Therefore, BBG Bangaru Talli Charitable Trust is trying to enhance the awareness among the rural students by providing Life Skills and Career Guidance Sessions in Govt. School associating with the Nirmaan Organization. As a part of this initiative, there are three steps in career guidance counseling sessions. The Trust became successful in accomplishing its first step by enlightening them about basic life skills and further way of higher education in the month of September. More than 490 students from grade 9 & 10 have taken active participation in the sessions. In the month of November, second step of Life Skills and Career Guidance Sessions was done by providing awareness on Leadership qualities, Communication Skills and Presentation Skills. This second level Career Guidance Session mainly focuses on psychometric test to the students, by conducting this test we would be able to assess interest, IQ levels, Capacities. After the analysis a clear report of their overall personality will be to each individual who attended the test at the third level of Life Skills and Career Guidance sessions. The Psychometric test is concerned with the objective measurement of skills and knowledge, abilities, attitudes, personality traits, and educational achievement. Some psychometric researches focus on the construction and validation of assessment instruments such as questionnaires, tests, raters' judgments, and personality tests. About 485 students have written this psychometric test. They were provided with valuable information which would have a great impact on their future endeavors. Building Blocks Group is behind this noble cause of empowering girl children and hence, established the “BBG Bangaru Talli Charitable Trust”. Building Blocks Group’s Vision is to achieve one million happy customers by the year 2030 by offering safe and secured land investments. BBG-BTCT is looking forward to achieve its vision of empowering girl child by providing Life Skills and Career Guidance awareness sessions. The Founder of Building Blocks Group and the BBG Bangaru Talli Charitable Trust, Mr. MV Mallikarjuna Reddy is glad to receive a great appreciation from the school management and parents for its contribution to the rural community which will assist a lot to the upcoming generations.