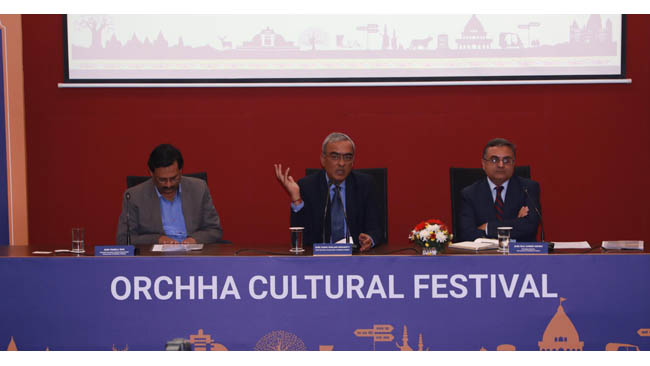 Bhopal, December, 2019:  Adding to its ongoing initiatives to promote Madhya Pradesh as a leading tourism destination in the country, the State Tourism Board announced “Namaste Orchha”, a new festival scheduled to be held from 6-8 March 2020, celebrating the cultural landscape of the state in the historic town of Orchha. The festival was announced by Mr. Sudhi Ranjan Mohanty, Chief Secretary, Government of Madhya Pradesh at a press conference in Bhopal in presence of senior officials and members from the travel and tourism fraternity.

The three day extravaganza in this ancient and quaint town will feature diverse activities of music, art, wellness, travel, nature, adventure, history and culture. Noted sitar player and ‘Tansen Samman’ awardee Manju Mehta will be performing at the festival. There will also be ‘gram’ and ‘farm’ stays to promote rural entrepreneurship; workshops and site-visits for photography, film-making, performing arts; exhibitions showcasing the state’s handicraft heritage and legacies, sustainable fashion and design presentations in collaboration with master-craftsmen and well known global-local brands. It will also offer opportunity for local businesses to expand tourism offerings and weddings industries to exploit the yet untapped potential in the state.

The Madhya Pradesh Tourism Board has recently won 10 National Awards and the state has also been listed among the Top 3 'Best Value Destination' of the world by Lonely Planet. The Madhya Pradesh Government has identified tourism as one of the leading sectors for development and aims to promote MP as an attractive destination for both domestic and international travellers. There is a sustained focus on infrastructure development, restoration of heritage sites, development of natural reserves and biodiversity, promotion of sustainable and responsible tourism as well as rural tourism.

Speaking on the occasion, Mr Sudhi Ranjan Mohanty said. “It is a matter of huge pride that Orchha won the award of the Best Heritage City at the National Tourism Awards 2017-18 and is already on the shortlist for UNESCO World Heritage Sites. It has the potential to become an additional destination comprising the Golden Triangle for travellers in India. The thought is to build an annual festival in this heritage town that celebrates the cultural collage of Madhya Pradesh, brings fresh perspectives to skill building, creates opportunities of local employment and sustainable economic growth and  becomes a key contributor to the image of Incredible India.”

Mr. Pankaj Rag, Principal Secretary, Department of culture, Government of Madhya Pradesh said, “Namaste Orchha will see the coming together of diverse cultural expressions to create a beautiful spectacle and introduce the hidden gem of Madhya Pradesh to the visitors. Amongst a plethora of engaging activities, the festival will celebrate the artistic legacies through established talent and also provide a platform for upcoming talent. It will be an experience to add to a traveller’s culture bucket list.”

Mr. Faiz Ahmed Kidwai, Secretary Tourism, Govt of Madhya Pradesh and Managing Director, Madhya Pradesh Tourism Board said, “Madhya Pradesh is among the most exciting tourist destination in the country and has immense potential to grow inbound tourism. Under the vision of the Honourable Chief Minister, tourism has been identified as a key focus area. We are creating new opportunities and initiatives to promote the state and it’s rich cultural, natural and architectural heritage and its traditions and history. This festival will find a place of pride in the lives of the local populace of Orchha, sharing their home and heart with visitors. It will also bring the very best of Madhya Pradesh together in a meaningful celebration”.

Nestled on the banks of the Betwa river, a short 15 km drive from Jhansi, Orchha is replete with stunning architectural heritage steeped in legend and mythology.  It also boasts a rich wildlife and dense plantations which form a part of the Orchha Wildlife Sanctuary.

The Orchha Fort Complex hosts the legendary and unique Ram Raja Temple, built in honour of Lord Ram and is the only place where he is worshipped both as a god and as a king. There is the imposing Chaturbhuj Temple, with a blend of temple, fort and palace architectural features, the royal palaces- Raja Mahal and the Sheesh Mahal, which is now converted into a heritage hotel; the Jahangir Mahal built by Maharaja Bir Singh Deo in honour of a visit by the Mughal Emperor Jahangir; and the Phool Bagh, an architectural marvel built for natural cooling through a water ventilation system. Numerous cenotaphs or chhatris, constructed in honour of various erstwhile rulers of the city, dot the vicinity of the fort and the Betwa river.

The rich and unfettered natural resources, biodiversity and pristine landscape are also an unparalleled attraction for nature and adventure lovers to explore Orchha. From guided tours of the Orchha Wildlife Sanctuary to adventure sports along the Betwa river, picturesque natural beauty to an experience of rural life, there’s something for every traveller to take home.