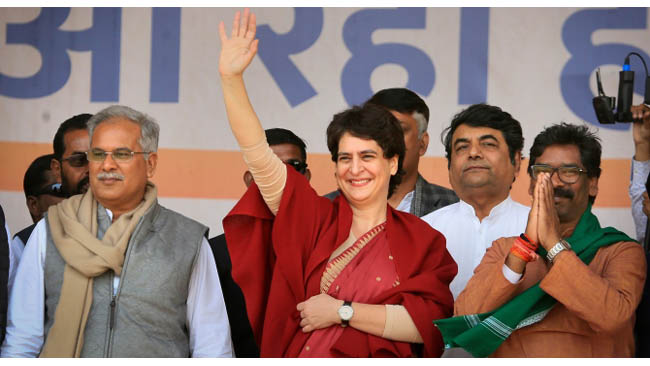 She also attacked the prime minister on economic slowdown, Citizenship Act, National Register of Citizenship and alleged assaults on women in different parts of the country.

"From Bhognadih Modi ji gave some challenges to Congress.

From here (Pakur), on behalf of the people of Jharkhand, I would like to challenge the prime minister.

"Modi ji speak about Santhal Pargana Act; tell about starvation deaths in Jharkhand; Answer about unemployment; Tell about rape of women..say about corruption.

"But you dont have answers to those questions," she told the poll rally.

The Prime Minister had on Tuesday dared the Congress to announce if it would give every Pakistani the Indian citizenship, re-introduce Article 370 and bring back Triple Talaq to its previous status.

Equating a student who takes several excuses if he or she failed in school, Priyanka Vadra said, "Prime Minister takes excuses for his governments failures be it failures in economy, strengthening farmers or providing security to women and blames Congress."

Priyanka Vadra was addressing her maiden election meeting in the Jharkhand Assembly elections on the last day of the campaigning.

JMM, Congress and the RJD comprise opposition coalition in the Jharkhand polls.

She informed the people of the Santhal Pargana about the attacks on tribals in Uttar Pradeshs Sonbhadra district and a BJP MLAs alleged involvement in a rape case.

Taking on the BJP government on CCA and NRC,the Congress general secretary claimed that Rs 1600 crore was spent in making NRC, "but it failed in Assam. Now they brought CCA.

Assam is burningstudents, who raised voice in Delhi, are beaten up."

Making a jibe at the incumbent government in Jharkhand, Priyanka Vadra said, "When I came here, chairs were being removed for want of space. The way you removed chairs from the ground, remove this government from its 'chair'.

"What did it do for you? Vote for such a government which will work for your interest, listen to students, waive farm loans, protect women and your culture," she asked.

Alleging that the Santhal Pargana Tenancy Act and Chhotanagpur Tenancy Act were meddled with by the BJP government, the Congress leader said, "The Congress will never tolerate anyone touching CNT/SPT acts that protect tribal land."

"I learnt from Indira Gandhi that protecting the tribals is not only Congress policy but also it is in the blood," she said.

Taking a swipe at the saffron party, she said the BJP is "super hero" in campaigning, but "zero" in work with its hollow promises.

It has not fulfilled its promises made to the people of the country ...failed to give Rs 15 lakh as promised to every citizen from money brought back to the country from abroad while farmers committed suicide, she claimed.

Priyanka Vadra said, "Wrong policies of the central government has led to slow down of the economy.

The Congress leaders said, "You are the owners of water, forest and land; can anyone forcibly snatch them? This election is to save your identity and land.