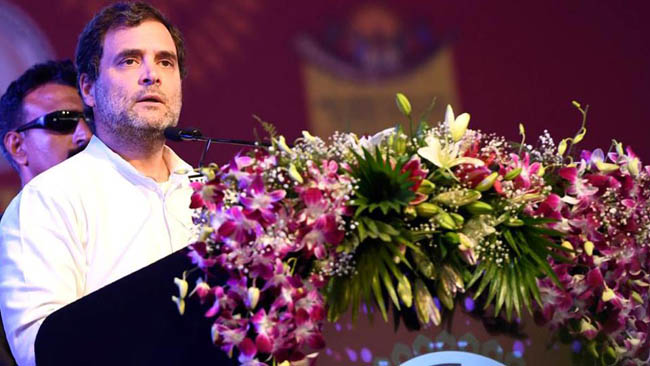 Congress leader Rahul Gandhi on Friday renewed his party’s attack on the Bharatiya Janata Party-led national coalition over the National Register of Citizens (NRC) and the National Population Register (NPR) as an attack on the poor. “Whether it is NRC and NPR, it is a tax on poor people of the country,” Gandhi, 49, told reporters in Chhattisgarh capital Raipur.

“Demonetisation was a tax on poor people of the country. This too is the same thing. Go to the officer...poor people will go...show your papers...give bribe if your name is slightly wrong. Crores of money will go from the poor people to the same 15 people,” Gandhi said.

The reference to the 15 people is a throwback to Gandhi’s pitch in the run up to the national elections that accused Prime Minister Narendra Modi’s government of framing policies to enrich some of the country’s richest people. The campaign wasn’t seen to resonate with the public which returned PM Modi with a larger mandate. Gandhi stepped down as Congress president soon after.

“I am saying that it is an attack on poor people,” he said, attempting to steer the political narrative to lack of jobs and economic slowdown.

“Poor people are asking how will we get employment? The economy earlier used to grow at 9 per cent, now it has come down to 4 per cent, that too when it is being measured by the new method. By the old method, it will be 2.5 per cent,” he said.

Rahul Gandhi’s effort to double down on not just the NRC but also the NPR is seen as hardening of the Congress’ stand.

The concept of the population register had been a part of the Citizenship Act and its rules framed before Atal Bihari Vajpayee’s term as prime minister ended in 2004. But it was only after the 26/11 Mumbai terror attacks and the change of guard in the home ministry - P Chidambaram was brought in from the finance ministry - that the government really started working on the population register.

When census enumerators made their first rounds during the 2010 houselisting exercise that precedes the decadal headcount, they also got people to fill up forms for the population register. The digitised register already contains the demographic database of more than 119 crore residents

Chidambaram, who had overseen the project, has distanced his version of the NPR from the one being proposed for next year. In a tweet on Thursday, he called it “very dangerous and different” in text and context of the NPR 2010 and part of what he said, was the government’s “more sinister agenda”.

One difference between the two NPRs is that the one to be conducted next year would require people to declare if they and their parents were born in India.