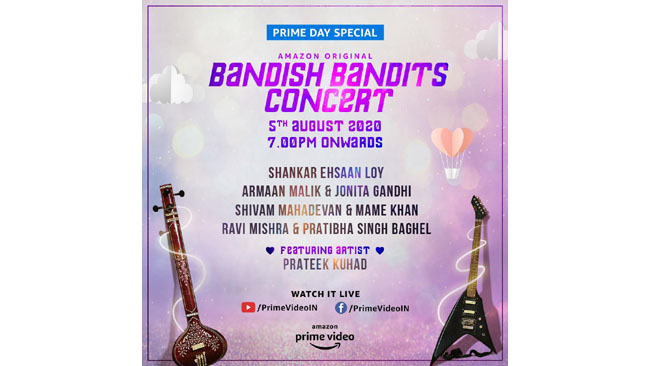 Amazon Prime Video today announced an exciting virtual music concert in celebration of the launch of their newest Amazon Original Series, Bandish Bandits. The concert will be headlined by Shankar Ehsaan Loy and will feature acts by some of the most popular names from the Indian music industry such as Armaan Malik, Jonita Gandhi, Prateek Kuhad, ShivamMahadevan, Mame Khan, Ravi Mishra and Pratibha Singh Baghel. Presentedas a special offering a day prior to this year’s Prime Day event, the virtual musical extravaganza is open for all and will stream live on August 5 on Amazon Prime Video’s official Facebook & YouTube page. A melange of classical and pop music, the concert will feature songs from Bandish Bandits’ much loved sound track along with other hits by Prateek Kuhadand Shankar Ehsaan Loy.

“We’re thrilled with the response to the Bandish Bandits soundtrack. It is a really special album, and an equally special show”, said Aparna Purohit, Head of India Originals, Amazon Prime Video, “it is our first musical and Shankar Ehsaan Loy have done complete justice to the story of Bandish Bandits with their soulful soundtrack. We are excited about the Bandish Bandits concert and can’t wait for our customers to immerse themselves in the coulourful and melodious world of this series.”

Singer Armaan Malik said, “It is always exciting to perform live for my fans online and I am really looking forward to being a part of the Bandish Bandits concert alongside Jonita and Shankar Ehsaan Loy!”