THIS FESTIVE SEASON, WATCH ALL-NEW EPISODES OF MIRZAPUR 2, BORAT: A SUBSEQUENT MOVIEFILM AND OTHER EXCITING TITLES ON AMAZON PRIME VIDEO 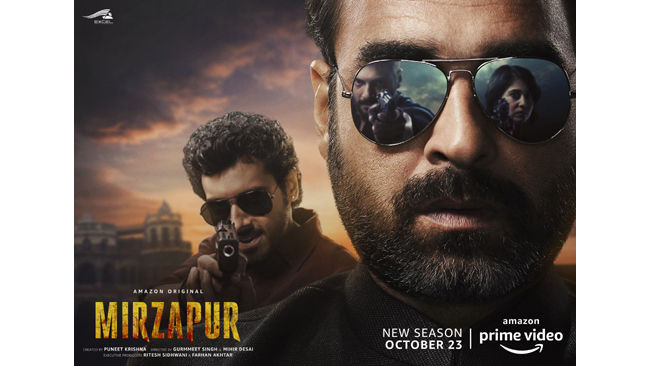 Starting October 21, stream the digital premiere of 2019’s Science-fiction thriller Captive State, the story of a young man who participates in a conspiracy to rebel against an alien race that has invaded Earth and forced strict martial law on all humans. Written and directed by Rupert Wyatt, the film stars John Goodman, Ashton Sanders and Jonathan Majors in pivotal roles. This sci-fi thriller will definitely leave viewers in a Captive State, offering an incredibly reveting alien invasion action with ambitious political undertones.

Continuing the non-stop entertainment, stream the latest International Amazon Original Movie Borat: Subsequent Moviefilm: Delivery of Prodigious Bribe to American Regime for make benefit once glorious nation of Kazakhstan. The film starring Sacha Baron Cohen & Irina Nowak in the lead roles is a follow-up film to the 2006 comedy centering on the real-life adventures of a fictional Kazakh television journalist named Borat; and will be available starting October 23.

Set in a Chicago neighborhood nearly a decade after an occupation by an extraterrestrial force, 'Captive State' explores the lives on both sides of the conflict - the collaborators and the dissidents.

The world of Mirzapur has become more about power, politics and revenge. It is about conspiracies and people double-crossing each other while carrying guns that they won’t hesitate to use. This season doesn’t stay confined to the violent world of Mirzapur - It takes us to the power corridors where a nexus between politics and criminals prevails. This season also takes us to a land beyond Mirzapur, a place which has its own set of violent and powerful families running various illegal businesses. The women of Mirzapur have become bolder and more complex. They will not hesitate in using any means to achieve their goals. Who will win in the end? Is there any one left to challenge the Tripathis? The canvas gets bigger this season, but the rules remain the same - without spilling blood you won’t survive here!

These titles will join the thousands of TV shows and movies from Hollywood and Bollywood in the Prime Video catalog. These include Indian films V, CU Soon, Gulabo Sitabo, Shakuntala Devi, Ponmagal Vandhal, French Biriyani, Law, Sufiyum Sujatayum, and Penguin, Indian-produced Amazon Original series like Breathe: Into The Shadows, Paatal Lok, The Forgotten Army – AzaadiKeLiye, Four More Shots Please S1 and 2, The Family Man, Mirzapur, Inside Edge S1, and S2, and Made In Heaven and the award-winning and critically acclaimed global Amazon Original series like Tom Clancy's Jack Ryan, The Boys, Hunters, Fleabag, and The Marvelous Mrs. Maisel. All this is available at no extra cost for Amazon Prime members. The service includes titles in Hindi, Marathi, Gujarati, Tamil, Telugu, Kannada, Malayalam, Punjabi, and Bengali.