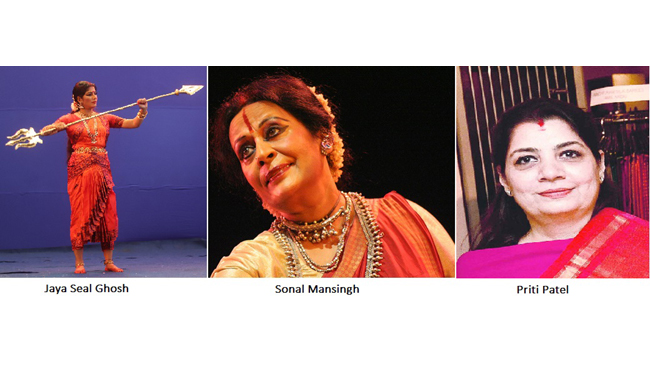 A short film “Dashobhuja” (the ten-armed Goddess) by ManicktalaChaltabaganLohapatty Durga Puja Committee has drawn the who’s who of the performing arts and film world to highlight the ten astras or weapons held by Maa Durga in each hand and its deep spiritual meaning and message. This musical film released its premiere at the ITC Royalin conformity with social distancing norms, would be in Bengali and Hindi.

The short film has been conceptualised and produced by culturist Sundeep Bhutoria who is also the Chairman of the 78-year-old ManicktalaChaltabaganLohapatty Durga Puja famed for its Dhak and SindurKhela. The film is directed by Arindam Sil and maestro Bickram Ghosh has given the music. While Pt Vishwa Mohan Bhatt of Grammy Award and Padma Bhushan-fame has done raag Durga for a portion of the film, Dr SonalMansingh has recited the Sanskrit shlokas. Singers Usha Uthup, Iman Chakraborty and Somchanda Bhattacharya have lent their voices to the short film whose script is written by Sugato Guha and choreographed by Arnab Bandhopadhyay. Ayan Sil contributed as the director of photography.

The entire shooting was done at the Eastern Zonal Cultural Centre (EZCC) Kolkata in Salt Lake. Nusrat Jahan and Rituparna Sengupta have lent their voice as the narrators of the story. For the Hindi version, Dr SonalMansingh has done the narration.

“Chaltabagan Durga Puja has been the first puja in city to popularise Dhak Utsav and Sindurkhela as special events which has been graced by chief minister, governors, diplomats, film fraternity, artists, industrialists, book lovers, folk and cultural performers and so on. This year we not organising Dhak and Sindurkhela factoring in the covid situation so we thought of trying our something new through which we would be able to showcase the cultural and spiritual aspect of Bengal’s most popular festival to our partners, associations and other cultural organisations in India and abroad,” said Sundeep Bhutoria, Chairman, ManicktalaChaltabaganLohapatty Durga Puja Committee.

The film revolves around the ten astras or weapons that the gods gave to Maa Durga, namely kharga (sword), trishula (trident), sudarshana chakra (thunder disc), vajra (thunderbolt), tirdhanush (bow and arrow), bharji (agni), sankha (conch), lotus, khitaka/parashu (gada) and snake. It starts with a lady doing “ChandiPaath” and a little girl representing Devi Durga. The ten astras of Maa Durga are represented by ten women. Each woman representing each an astra does a performance and at the end of which they present their astra to the little girl as the “Chandi Path” continues. At the end of the ten performances when the little girl is presented with all the ten astras we see the idol of Devi Durga complete `Dashobhuja’ form with all the astras in her hands. The video will start and conclude with excerpts and footages from previous years’ Puja celebrations at the ManicktalaChaltabaganLohapatty Durga Puja.