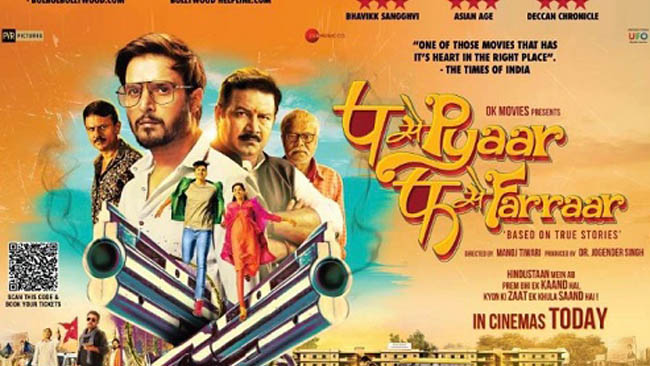 P se Pyaar F se Farraar hit the screens today. The film releases in more than 1000 screens and also getting a good response among the audiences and critics. Everyone is gushing about the film which makes it to be the talk of the town.Thanking the critics Producer Dr. Jogender Singh says, "I want to thanks critics for their fair and positive reviews. Also I highly appreciate the love that they have showered on the film. It has encouraged me to make films that lends value for money for Indian Cinema."
Talking about the film, Producer Dr. Singh adds, "Making a good film with great performers has its perks. I could recover the entire cost of my film by just selling the music & digital rights of the film. This has boosted my confidence to fund more meaningful cinema in the future."The film is based on true stories of Mathura focusing on the subject of Honour killing and Casteism. The film revolve around a young boy who is a national level sportsman falling in love with a girl and the struggles and consequences he had to face doing that.Apart from lead actor Bhavesh Kumar, parallel stars such as Jimmy Shergill, Kumud Mishra, Sanjay Mishra, and other important characters have added life to the story. Songs are the other attractive point of the film. Also, the shooting locations formed the perfect backdrop with the subject of the film.The film has been written by Vishal Vijay Kumar, Directed by Manoj Tiwari and Produced under the banner of Ok Movies Production. Music partner of the film is Zee music and the movie is nationwide distributed by PVR Pictures and UFO.