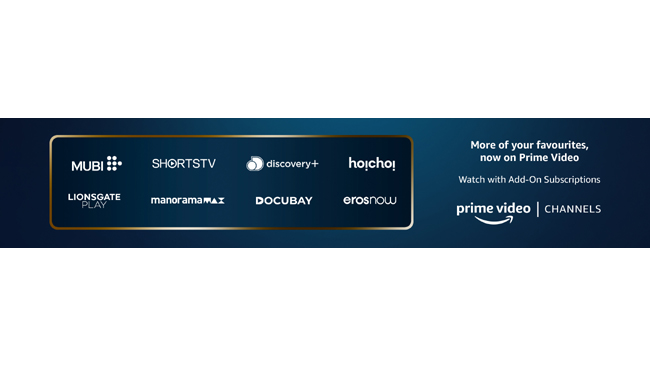 At launch, Prime Video Channels will give Prime members the option to watch global and local binge-worthy content including thousands of shows, movies, reality TV, documentaries etc., from eight video-streaming services including discovery+, Lionsgate Play, DocuBay, Eros Now, MUBI, hoichoi, manoramaMAX, and ShortsTV – each accessible with respective add-on subscriptions. Customers therefore will need to pay only for the service they choose. At launch, Prime members can enjoy a special introductory annual subscription offer made available by the OTT channel partners.

“At Amazon, we have always focused on improving access, experience and selection for our customers,” said Gaurav Gandhi, Country Manager, Amazon Prime Video, India. “Over the last 4 years, we have continuously strived to entertain and delight our customers by programming in 10 languages, making available Exclusive and Original content from India and around the world and by ensuring a world class streaming experience across screens. All of this has made Amazon Prime Video the most loved premium streaming service with viewership from 99% of India’s pin-codes. With the launch of Prime Video Channels, we now take the next big step in our journey to entertain India by creating a video entertainment marketplace – first of its kind in India – which will not only delight our customers by giving them even more entertainment choices, but also benefit the OTT Channel partners who collaborate with us to leverage Prime Video’s distribution, reach and tech infrastructure.”

·         No hassle login & billing: Customers will no longer have to juggle between multiple usernames, passwords and billing due dates. With Prime Video Channels, all premium content subscriptions are managed within a single destination – Prime Video apps and website.

·         More time watching, less time deciding: Customers won’t have to spend time toggling between their favorite services to discover what’s new and popular. With Prime Video Channels they can browse in one place, search across all their premium subscription and get personalized recommendations. All of this without ever having to leave the Prime Video app or website.

·         Enjoy your favorite features, no matter which service: Customers can enjoy IMDb’s X-Ray feature and a single consolidated watch list and download library for offline viewing. Subscribers can also manage data consumption and much more across all their premium channel subscriptions.

Prime members will be able to subscribe to Prime Video Channels offering programming in local Indian languages such as Bengali with hoichoi and Malayalam with manoramaMAX, and a selection of award-winning documentaries and short films from DocuBay and ShortsTV respectively. Consumers can enjoy blockbuster and quality cinema from Lionsgate Play, MUBI and Eros Now, across languages and genre, while discovery+ adds an array of Wildlife, Adventure, Science, Food, Lifestyle content. The new channels and their popular titles like The Father, Byomkesh, Star vs Food, Haathi Mere Saathi will now be available alongside customer favorite Amazon Originals like Shershaah, Mirzapur, Paatal Lok, The Family Man and The Tomorrow War, so there’s no need to toggle from app to app.

Prime Video Channels subscriptions and annual pricing in INR available at launch in India include:

·         discovery+: Rs 299/year - India’s first and leading aggregated real-life entertainment streaming app focuses on enriching programming drawn from the libraries of Discovery. With popular original series such as Star vs Food, Into The Wild and Secrets of Sinauli, many more acquired and exclusive content across 55+ sub genres including Science, Adventure, Food and Lifestyle, discovery+ is offering a 25% discount for Prime members at launch.

·         DocuBay: Rs 499/year - Specializing as a factual entertainment video service, DocuBay features documentaries from all corners of the globe in a variety of categories. Popular titles include Himalayan Gold Rush, WHO is in control, Eye To Eye with Everest, The Creepy Line and more.At launch, DocuBay is offering a 50% special discount on its original pricing of Rs 999 for Prime members on annual subscriptions.

·         Eros Now: Rs 299/- The leading OTT service is home to one of the largest movie libraries with over 12,000 titles, and premium original episodic series, music videos, and more. Eros Now offers content in 13 languages. Subscribers can catch popular movies like Shubh Mangal Savdhan, Haathi Mere Saathi, Tanu Weds Manu Returns, English Vinglish amongst others and Originals like Flesh, Metro Park Season 1&2, Halahaland many more. At launch, Prime Members can avail an introductory 25% off on annual subscriptions offered by Eros Now.

·         manoramaMAX: Rs. 699/ year –manoramaMAXis the OTT platform that comes from the house of MM TV Ltd, the television network from Malayalamanorama Group, is the first Malayalam OTT that showcases Entertainment and News content. manoramaMAXoffers a variety of programs ranging from entertainment content that come on Mazhavilmanorama, originals to news and infotainment content broadcast by the manorama News channel, bringing a catalogue of over 300 Malayalam movies with names like VijayumSuperumPournamiyum, Luca, Om Shanti Oshaana, Guppyetc. Prime Members can avail introductory 30% discount at launch.