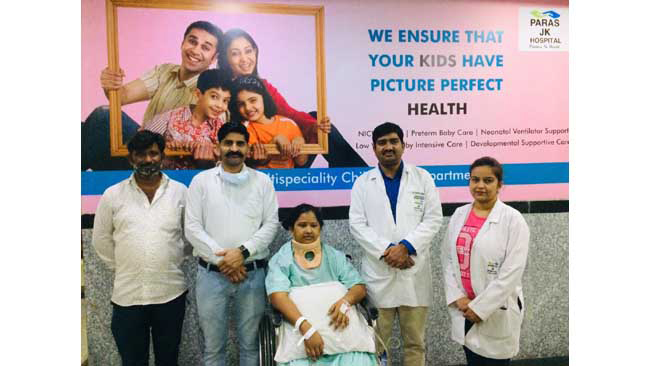 21 years old Shobha a resident of Pali was suffering from an unusual weakness in hands and legs since a few months. This gradually progressive weakness manifested as inability to walk and move. With this issue she reported to Paras JK Hospital, Udaipur. After certain initial investigations and MRI of Spine it was found that she had Spinal Ependymoma named tumor in her upper spinal area which was the reason to her sudden weakness and inabilities. It was located in within the area of upper portion of the spine to half of the spine. With further investigations it was observed that the tumor was 17 centimeters long, which according to doctor was quite shocking and rare.Considering the urgency of the case a surgery was planned under the experienced supervision of Dr. Ajit Singh, Consultant Neuro and Spine Surgery.

The entire procedure went for around 10 long hours. Shobha’s entire spinal area was cut open and it took extra effort to preserve surrounding nerves and blood veins. The surgery went successfully and the tumour was removed completely. Along with Dr. Ajit Singh, Dr. Naresh Goyal Consultant Anesthesia assisted in this surgery. Now Shobha is almost fully recovered and ready to lead a normal life.

Dr. Ajit Singh, Consultant, Neuro and Spine Surgery, Paras JK Hospital, Udaipur said, “As far as the tumours are concerned, early detection is the key which ensures faster recovery of the patients. Hence never ignore any related initial symptom, consult a doctor and opt for prescribed tests and treatment.”