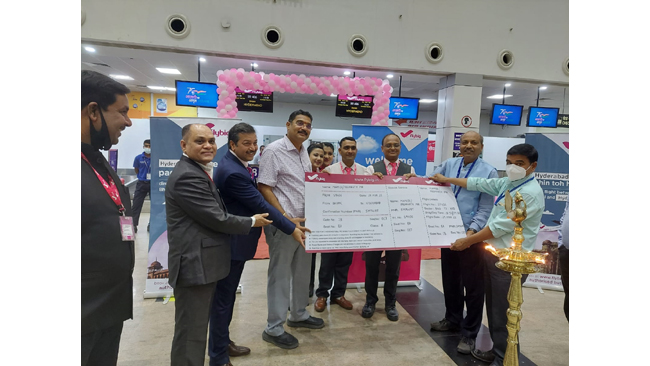 flybig is on an expansion mode, adding more destinations to India’s aviation map.  It just launched a new commercial flight route from Bhopal and Hyderabad.  The Inaugural Commercial Flight which took off from City of Lakes, Bhopal at 19:50 hrs to City of Pearls, Hyderabad, informed in a press note issued by the company in Hyderabad today .

FlyBig is a regional airline and it is promoted by Gurugram-based Big Charter Private Limited.

flybig is the only airline in India, which started in the midst of Covid-19, Pandemic. The airline is focused on connecting tier-2 and tier 3 cities within India. In its brief operational history, flybig has established flight routes in North East, South, and Central India.

Mr.KL Aggrawal, Airport Director, Bhoj Airport, Bhopal, stated that regular flybig commercial flights from Bhopal to Hyderabad will play an important role in the convergence of new ideas among people in these two commercial and cultural hubs of Central and Southern India.

flybig Inaugural Flight provided special moments for flyers who boarded it, Mr.Premnath, who was given the buddy boarding pass, was overjoyed when he was invited for a photo opportunity by the flybig team and airport authority officials, along with the enlarged souvenir of the Buddy Boarding Pass. It was also a special day for Ms Sonali because she was greeted and acknowledged with a bouquet of flowers by Ms Bibiana (Terminal Head - GHIAL) for being the first guest to arrive from the inaugural flight when she arrived at Rajiv Gandhi Airport, Hyderabad from Raja Mihir Bhoj Airport, Bhopal.

“Since its inception, flybig has focused on articulating its core business philosophy of converting rail miles to air miles by providing affordable air travel in the country. India is an aspirational country experiencing equitable growth across all regions, we have kept flight tickets low in order to provide the general public in our country with the opportunity to experience air travel; our flight tickets begin at 2999/-“, said Captain Sanjay Mandavia, CMD of flybig