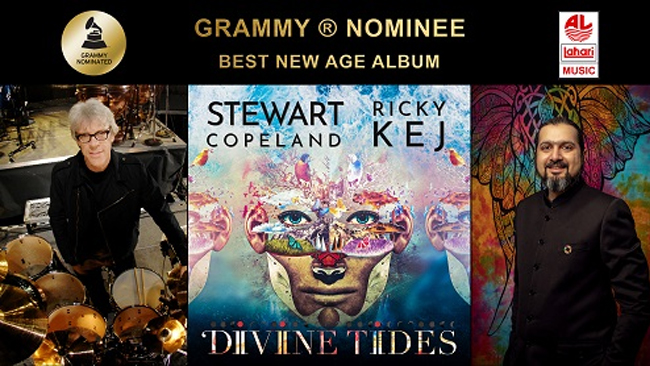 ndian Music Composer and Grammy Winner Ricky Kej and Rock-legend Stewart Copeland (The Police) have been nominated for their latest album ‘Divine Tides’ at the 64th Annual Grammy Awards. South India’s largest label Lahari Music is the producer for this album. Ricky Kej’s previous Grammy Award win came in 2015 for his album ‘Winds of Samsara’. Based on the ideals of Mahatma Gandhi and Nelson Mandela, ‘Winds of Samsara’ was a runaway success and debuted at No. 1 on the US Billboard New Age Albums chart, a first for a person of Indian origin. Ricky is the youngest person from India to have won a Grammy Award, and only the 4th Indian. 5-time Grammy Award winner Stewart Copeland is the founder and drummer of the legendary British rock group ‘The Police’.

Featuring artists from around the world, the current Grammy Nominated music album ‘Divine Tides’ is a tribute to the magnificence of our natural world and the resilience of our species. This critically acclaimed album contains 9 songs and 8 music videos that were filmed around the world from the exquisite beauty of the Indian Himalayas to the Icy forests of Spain. ‘Divine Tides’ has already won several awards at various festivals from around the world. The music videos were released exclusively by Lahari Music, South India’s leading record label.

The Grammy award winner Ricky Kej quotes “It is an absolute honour to be nominated a second time for a Grammy Award for our album ‘Divine Tides’. Although my music is cross-cultural, it has always had strong Indian roots and I am extremely proud that Indian music has been recognized and shortlisted for this prestigious award by The Recording Academy. This nomination encourages me further and solidifies my belief to continue making music that can inspire positive social impact. I’d like to thank The Recording Academy for this nomination, my collaborator Stewart Copeland for the best musical experience of my life, all my fellow artists and everyone else who made the album ‘Divine Tides’ possible.”

“One day during the Apocalypse I got a call from Ricky Kej about making an album. He had assembled an amazing collection of exotic musicians, or perhaps I should say deeply traditional musicians, in the exotic context of his inspired production style. The flow of ideas soon became a torrent of recording and music. The spiritual ambience (not something that I’m generally known for) infused my aggressions upon inanimate objects with loving passion. The timpani were ringing! The crotales were singing! Making this record has been a unique adventure in both music and divine awareness,” says Stewart Copeland the Grammy Award Winner.

LahariVelu, Director, Lahari Music speaks on this honour saying “It’s absolutely a great honour to be nominated for a Grammy Award for our album ‘Divine Tides’. It’s all the hard work of an exceptional collaboration between music geniuses such as “Ricky Kej” and “Stewart Copland”. Lahari Music always has and always will support great artists to entertain music lovers all over the world. It’s time Indian artists and Indian music gains its worldwide audiences. I’d like to thank the Recording Academy for this nomination for this great collaborative work.”