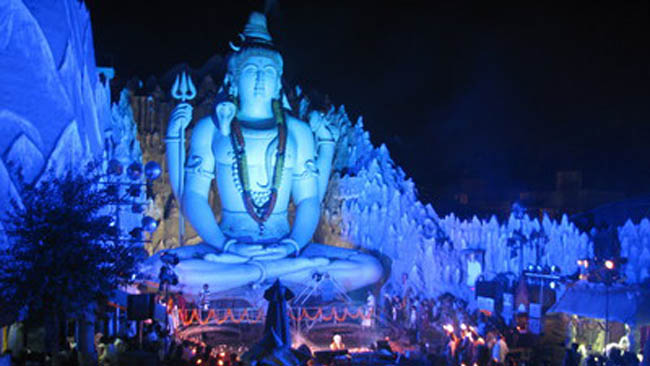 BANGALORE, 19 FEBRUARY, 2020: February 21st, 2020 is a very special day at the Shivoham Shiva Temple at Murgesh Pallya by Humanitarian Hands Trust as it celebrates its Silver Jubilee and 25 years of Maha Shivratri Celebrations. The temple, over the years, has not only become a much sought after and revered spiritual destination, but has also acquired the distinction of being one of the most powerful Shiva temple in the world, a temple where its believed that dreams come true and prayers are answered. Therefore, on the sacred day of Maha Shivratri, it is not surprising that lakhs of devotees visit the temple to perform poojas and offer prayers to their beloved Lord Shiva.The Shivoham Shiva Temple, however, is considered to be more than just a temple that propagates faith. It is a temple that seeks to guide believers to become seekers and leads them to the realization of the truth of Shivoham, that God is everywhere and in everything; that everything is a manifestation of the Divine power. The temple, thus, strives to take seekers Godward, finally, to attain the ultimate goal of life - Liberation, Moksha, Mukti, Nirvana, Enlightenment.Highlights of the 2020 Maha Shivratri CelebrationsThe Maha Shivratri celebrations at the Shivoham Shiva Temple have to be experienced for the spiritual guidance and support offered there. The core focus of this year's celebration is spiritual evolution: the evolution from Om Namah Shivaya to Shivoham. It calls upon seekers to go beyond religion, and to evolve from Om Namaha Shivaya to Shivoham, to realize God within - in the temple of their hearts.24 hours of Bhajans in praise and in gratitude to the Deity; chanting of mantras; the Shivoham Jaagran Express, an all-night vigil that is believed to help devotees stay awake and 'be awakened'; the Maha Yagna, with a 6-feet-tall yagna kund, reminiscent of ancient days of yogis and sages; the absolutely spellbinding and spiritually uplifting Maha Shivratri Light and Sound Show are some of the key highlights of this year's celebration. In addition to this, the Shiva Arti, which is performed every two hours, and several other spiritual activities and special poojas have also been organized to engage devotees and make their spiritual experience quite unlike what they have experienced before.To commemorate the 25th Anniversary of the Shivoham Shiva Temple and 25 years of Maha Shivratri Celebrations, a special book, 'The Ladder to Heaven', authored by AiR, the founder of the temple is scheduled for release on this day.Attractions at the Shivoham Shiva TempleThe Magnificent Statue of Lord Shiva: Ever since its inception, the 65-feet-tall idol of Lord Shiva has been the focal point of the temple, attracting tens of thousands of followers every year. This Maha Shivratri, like every year, is no exception. In fact, because of the 25th-anniversary celebrations, the crowds are only expected to be larger. Every year on Maha Shivratri, devotees with enthusiasm want to catch a glimpse of Lord Shiva- even senior citizens or those with physical challenges patiently wait in eager anticipation for the darshan of Bholenath.Other Attractions: Devotees are also drawn to other attractions at the temple that make the temple singular in all that it embodies and offers. Devotees seek the blessings of the 32-feet-tall idol of Lord Ganesha, pray at the Navgraha Temple, and undertake the sacred, the beautifully recreated Amarnath Paanch Dham Yatra. The Barah Jyotirling Yatra and the Barah Jyotirling Abhishek are also popular with devotees. Incidentally, the Shivoham Shiva Temple is the only temple that brings everything related to Lord Shiva under one roof, be it the lingas or the holy pilgrimages associated with his Divine Grace.Humanitarian Work of The Temple: Shiv Gyani, Jan SevaThe Shivoham Shiva Temple believes that Service to Humanity is Prayer to God. Hence, it supports the A.i.R. Charitable Home and A.i.R. Transit Home, homes for the poor and homeless run by the A.i.R. Humanitarian Homes. These two charitable institutions care for and look after 600 needy people every day. The residents at these homes are provided with medical care, besides necessities like food, shelter, and clothing.Proceeds from the temple go towards doing God's work - serving the destitute, the poor, and the homeless that are sheltered at the A.i.R. Humanitarian Homes.Celebrate this very special day of Maha Shivratri at the Shivoham Shiva Temple on February 21st, 2020.