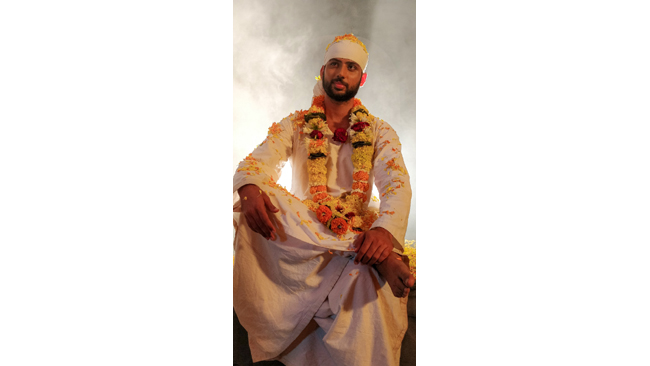 TV serial “Anantkoti Bramhandnayak Saibaba” being produced under the banner of 'Shri Tipupati Films' will telecast from Monday to Friday at 8.30 PM on DD Kisan channel from 16 February 2021.

Saibaba’s life, his teachings and his life mission has been shown with focus even on his childhood and young age along with old Sai in this serial for the first time. Master Aryan Mahajan is playing the role of Saibaba’s childhood, while Sarthak Kapoor is playing the role of young Saibaba. Samar Jaisingh is portraying the character of aged Saibaba. Writer Vikas Kapoor, renowned for religious serials, is the writer, producer of this serial. He has scripted this serial after working for nearly 6000 telecast hours. His film “Shirdi Saibaba” bagged the President award.

About his new serial Vikas Kapoor said that 'I want to take Saibaba’s inspiring and great story to millions of people. I had sent this proposal to Doordarshan six years ago. Due to Saibaba’s blessings, finally last year, DD approved the proposal and now the serial is set to reach its audience. This is the happiest moment for me, since not only India, but whole world shall imbibe Saibaba’s teachings and advice. The entire life story of Saibaba will reach people though his show. The people will see how a naive village boy became almighty Saibaba”.

“The people are aware of the story how Shri Ram and Shri Krishna were born their journey of being accepted as god, but people are not aware of the tale behind the childhood and youth of Saibaba. The struggle of Saibaba in his childhood, his meditation and his spiritual practice, till be attained Samadhi (liberation) has been shown inexhaustively in this show. I have sourced the script from the book “Sai Ki Atmkatha”(Saibaba’s biography), “Sai Charitra”, Khaparde’s diary and “Sailila Patrika”, Kapoor said.

Sarthak Kapoor, young talented actor playing the character of young Saibaba(who is also the hero of forthcoming film “Chal Jeet Le Ye Jehan” based on cricket) said “this was a very challenging role for me, for which I had to make a lot of efforts to mould myself into the character. I always remember Saibaba when I am in distress and he always helps me in overcoming my difficulties. I feel blessed that I got a chance to play Saibaba’s character. I had to work on my speech, since the language used by the saints and sages is altogether different from the style and language we speak”.

Serial’s director Chandrasen Singh and Vijay Saini said that it was quite difficult to project the entire life of Saibaba and base the show on that period. But since we were backed by Vikas Kapoor’s writing and his experience, we are confident that we were certainly successful in communicating Saibaba’s life mission, his knowledge and his way of providing a remedy to people’s problems.

Cameraman R R Prince, has handled the picturisation, while Music Director Amar Desai has scored the music. Pappu Trivedi is the Video Editor and Vikas Kapoor is the writer. The background music has been provided by Prakash Nar for this daily soap.