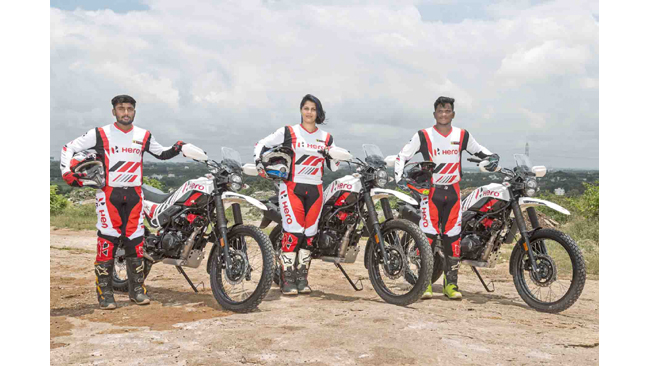 In line with its sustained efforts to popularise motorsports and promote athletes, Hero MotoSports Team Rally, the motorsport team of the world’s largest manufacturer of motorcycles and scooters - Hero MotoCorp – has strengthened its National Team’s rider line-up by onboarding three new young riders.

Hero MotoSports National Team consists of the experienced pair of Sathyaraj and Yuva Kumar, who will now be joined by the three new riders - Tanika Shanbhag, Karan Kumar and Arun T.

The youngest of the three is 20-year-old Tanika Shanbhag,from Satara, Maharashtra, who is also the first female rider for the Team. Tanika, who is currently pursuing a Bachelor’s in Business Administration alongside her racing career, is a highly ambitious rider, and well on her way to being one of the fastest female riders in the country. She finished on the podium as Runner-up at the 2020 and 2021 editions of the Indian National Rally Championship, as well as winner of Group B class (upto 260cc),and achieved a top-10 overall finish in the inaugural Rally of Himalayas 2021.

Karan Kumar – the 23-year-old riderfrom Coimbatore in Tamil Nadu- comes with a solid experience in Super cross as well as Rally racing formats. He is the winner of Round 3 of the Indian National Rally Championship 2022 (Group B –260cc class) and is currently running 3rdatthe INRC 2022 (up to 260cc class) with consistent finishes in the Top 5.

Completing the rider line-up is 22-year-old Arun T from Hassan in Karnataka, who has also enjoyed success in both Supercross and Rally disciplines. He is currently leading the Indian National Supercross Championship in the 260cc class. Using this season in Rally as a training season, Arun has been trying out different bike setups in different classes in the championship, and achieved a top 5 finish in Group B (modified upto 260cc class) and a 2nd place in Group D (stock, upto 260cc class).

Team veterans, Sathyaraj and Yuva Kumarhave been riding for the National Team since its inception in 2020. Yuva was the National Champion in Group B modified class (upto 260cc class) and Group D stock class (upto 260cc)at the Indian National Rally Sprint Championship in 2021.Sathya finished INRSC 2021 as runner-up in Group D stock class (up to 260cc). They have won multiple titles and podiums in varied events such as the Ace of Dirt, Rally of Chamba, SJOBA Rally, Dakshin Dare, Ultimate Desert Challenge, and more.

The 5-rider squad will first be seen in action at the opening round of the Indian National Rally Sprint Championshipat Bengaluru in the first week of September. The riders will take on the country’s varied terrains astride the specially designed Hero MotoSports Xpulse Rally 200 and the Hero Xpulse 200 4V. While the Hero Xpulse 200 4V continues to dominate the Stock categories, the expert team of engineers at Hero MotoCorp’s world-class R&D hub, the Center of Innovation and Technology (CIT), Jaipur has been making continuous upgrades to the Hero MotoSports Xpulse Rally 200, to ensureconsistent high performances.

Dr. Arun Jaura, Chief Technology Officer, Hero MotoCorp, and Team Principal, Hero MotoSports Team Rallysaid, “I welcome the three young and highly talented riders to our Hero MotoSports family. We are delighted to have Tanika, the Team’s first female rider, and Arun and Karan as they begin their journey with us. Hero MotoSports is not only the flag-bearer of Indian motorsports; it also provides an avenue to the adventure seeking motor sports professionals in the country. With impressive results at national rallies, over the past few years, I am confident we will continue toscale greater heights. At Hero MotoCorp, we are committed to promoting sports and continue to promote D&I even in motor sports. I wish the new riders a fulfilling career with Hero MotoSports, and success for the now 5-member teamin the upcoming races.”

Wolfgang Fischer, Team Manager, Hero MotoSports Team Rally said,​“We are happy to announce our national team expansion with three strong riders - Tanika Shanbhag, Karan Kumar and Arun T. Within a short span of time, Hero MotoSports Team Rally has created a differentiated position for itself and we are glad to appeal to talented riders across the globe. These three riders were chosen from a large talent pool after multiple evaluations by our national team, along with our international team rider - Ross Branch, who was in India last month. I am confident that with their consistent track records they will take our competitiveness up several notches. Tanika is the first woman rider joining our team, and I am sure this will be the first of many. I congratulate the new members and wish them a successful journey with Hero MotoSports Team Rally.”