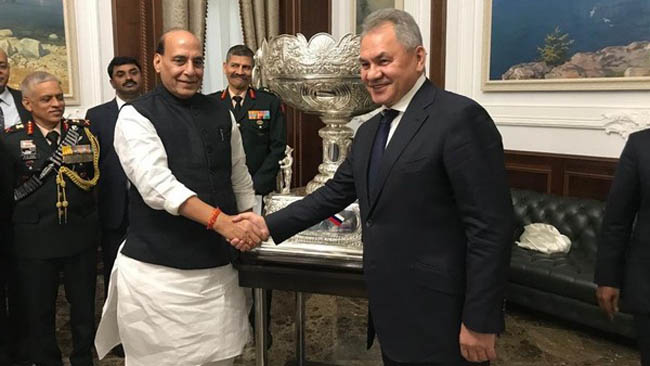 Raksha Mantri inspected the Guard of Honour at the Russian Defence Ministry in Central Moscow. Welcoming Shri Rajnath Singh on his maiden visit to Russia as Raksha Mantri, General Shoigu termed India as an exclusive strategic defence partner.Shri Rajnath Singh emphasised that the special and privileged strategic partnership between the two countries was further strengthened following the Vladivostok Summitin September 2019. He highlighted the importance of the Inter-Governmental Agreement on manufacturing of spares, components and aggregates in India through joint ventures that would reduce cost, timelines of supply and result in progressive indigenisation. This agreement is expected to provide a major boost to the ‘Make in India’ initiative.

Responding to Raksha Mantri’s invitation, the Russian Defence Minister assured robust Russian participation in DefExpo 2020, to be held in Uttar Pradesh capital Lucknow between February 5-8, 2020. Both Ministers also welcomed the outcome of the India-Russia Defence Industry Conference held in Moscow on November 5, 2019. The Russian side affirmed its readiness to operationalise the joint venture lndo-Russia Rifles Private Limited for the manufacture of world class Kalashnikov AK 203 rifles in India at the earliest.

Shri Rajnath Singh held an in-depth discussion on a range of international issues of common concern. General Shoigu briefed Raksha Mantri on Russian operations in Syria. The Russian side reaffirmed its strong support to India in thefield of counter-terrorism and stated that it accords priority to New Delhi’s security interests in the region. The Russian Defence Minister underlined Moscow’s commitment to extend all possible support in enhancing India’s defence capabilities, including cooperation in advance and cutting-edge technology.Shri Rajnath Singh appreciated Russia’s steadfast support.

The ministers reviewed the progress of the two working groups on Military and Military Technical Cooperation. It was agreed that the forthcoming Tri­Service Indra Exercises will be a major milestone in Military Cooperation between the two countries.The Russian side affirmed its readiness to further deepen exchanges between the respective Military Training Institutions and informed that they would be deputing an officer for the prestigious National Defence College (NDC)course in New Delhi commencing 2020.

Both sides expressed satisfaction on the progress in implementing ongoing contracts concluded in the recent past. General Shoigu agreed toRaksha Mantri’s request to constitute specific working groups for after-sales support of keydefence platforms.Both sides agreed to intensify efforts to finalise cooperation programme for 2021-2030 period. The ministers directed the respective teams to work closely for early conclusion of the India-Russia Inter-Governmental Agreement on Reciprocal Logistics Support.

As a special gesture, the Russian Defence Minister requested Shri Rajnath Singh for participation of an lndian Military Contingent in Army Parade on the occasion of 75thAnniversary of the victory in the Second World War.Russian PresidentMr Vladimir Putinhas already extended an invitation to Prime Minister Shri Narendra Modi to attend the celebrations. Raksha Mantri assured that an Indian contingent would be participating in the Parade.

As a mark of long-standing friendship between the Armed Forces of India and Russia, Shri Rajnath Singh presented General Shoigu a bowl mounted on triangular base with three Indian Army soldiers’ statuettes in ceremonial regalia and rifle.

A Protocol was signed by the two ministers during the meeting.

Raksha Mantri will be visiting St Petersburg on November 7, 2019 on the final day of his visit to Russia. His engagements include wreath laying at the Piskarevsky Memorial Cemetery.