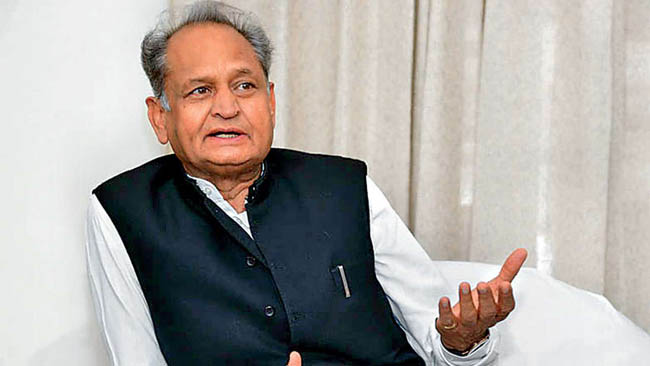 Jaipur, 25 October, 2019:  Rajasthan Chief Minister Ashok Gehlot on Thursday termed the poll verdict in Haryana and Maharashtra as a "moral defeat" of the BJP.

He said that the saffron party's vote share had gone down "drastically" in both the states.

"Today's verdict is a sign that people have started to react to BJP's communal agenda and that public does not approve of their arrogance and abuse of power,"Gehlot tweeted.

"BJP leadership expected a thumping majority but voters dashed their hopes. It shows top BJP leaders were cut off from the ground reality," he said.

The CM further said that economic slowdown and total inaction on part of the BJP leadership to improve conditions has had its impact on the poll results.

"In Haryana, voters have given a mandate against BJP. In Maharashtra their vote share and number of seats has gone down. In other bypolls, number of Congress candidates have won which shows people are now realising the difference between Congress party's agenda of public welfare and BJP's divisive agenda," he said.

"I am very much certain that people will reject more and more BJP's anti people policies now. By crippling the economy and ruining people's lives, it cannot remain in power for long," he said in a series of tweets.

He said policies of public welfare and economic prosperity of UPA years is what the people want again.

In Haryana, the Congress, which failed to bag even one seat in the Lok Sabha polls, won or was ahead in 31 of the 90 seats at stake compared to its previous tally of 15. The BJP, which had 47 seats in the outgoing 90-member house, won or was ahead in 40 seats. The half-way mark is 46.

In Maharashtra, the BJP-Shiv Sena coalition was on course to retain power albeit with a reduced majority withe the opposition Congress-NCP alliance putting up a good show.