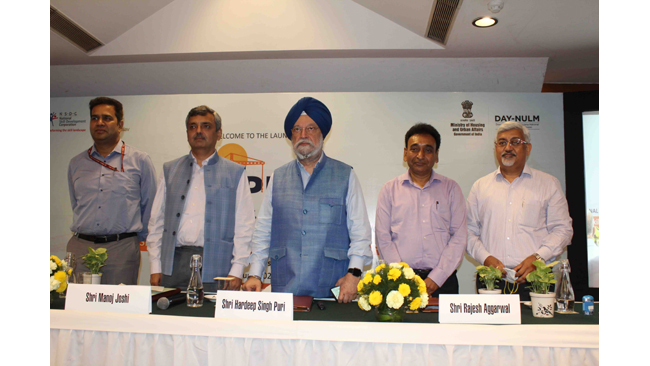 National Skill Development Corporation (NSDC), the nodal agency under the Ministry of Skill Development & Entrepreneurship, Government of India, and the Ministry of Housing and Urban Affairs (MoHUA) today announced the launch of project NIPUN- National Initiative for Promoting upskilling of Construction Workers. The project aimsto train more than one lakh construction workers through fresh skilling and upskilling programmes and provide them with opportunities in foreign countries. The project implementation is divided into three chapters -training through Recognition of Prior Learning (RPL) at construction sites, training through Fresh Skilling by Plumbing and Infrastructure SSC and International Placement through industries/builders/contractors.

On-site skill training will be provided to 80,000 construction workers through industry associations under the RPL certification, co-branded with MoHUA, while 14,000 candidates will receive fresh skilling through plumbing and infrastructure Sector Skill Council (SSC). The courses are aligned with National Skills Qualifications Framework (NSQF) and will be imparted at accredited and affiliated training centres. NSDC is also aiming to place at least 12,000 people in foreign countries like the Kingdom of Saudi Arabia, UAE and other GCC countries.

Project NIPUN will be conducted under the aegis of MoHUA, under its flagship scheme of the DeendayalAntyodaya Yojana-National Urban Livelihoods Mission (DAY-NULM). It will also facilitate and support convergence with related line ministries. Meanwhile, NSDC will be responsible for the overall execution of the training, monitoring and candidate tracking. It will provide trainees with Kaushal Bima (3-year accidental insurance with coverage of Rs 2 lakhs), digital skills like cashless transactions and BHIM app,orientation about entrepreneurship, and EPF and BOCW facilities. A project committee with members from both NSDC and MoHUA willbe formed under the chairmanship of Additional Secretary-cum-Mission Director, DAY-NULM to oversee and monitor the project.

While addressing the event, Shri Hardeep S Puri, Minister of Housing & Urban Affairs and Petroleum & Natural Gas said, “The transformational impact of the National Urban Livelihoods Mission (NULM) has definitively reduced the vulnerability of urban poor households by providing upskilling and employment opportunities to urban dwellers, especially the youth. The spirit of entrepreneurship has been encouraged and supported by giving urban workers access to self-employment and skilled wage employment opportunities. This initiative will enable Nirman workers to be more proficient and skilled while making them adopt future trends in the construction industry by increasing their capabilities and diversifying their skill sets.”

The minister also announced that the Central Vista Avenue will be opened in next few days.

Lauding the partnership between NSDC and MoHUA, Shri Rajesh Aggarwal, Secretary, MSDE said, “With the construction industry poised to become the largest employer by 2022, the dependency on technology cannot be ignored. I am confident that this unique project by NSDC and MoHUA, along with the support of all our stakeholders, will provide Nirman workers with better job opportunities, improved benefits, and safer work practices, making them torchbearers of not only an Aatmanirbhar Bharat but also play a pivotal part in transforming India into a skill hub for the rest of the world.”

The construction industry is poised to become the largest employer by 2022 and needs 45 million additional skilled workers over the next 10 years. To fulfill this mission, the National Real Estate Development Council (NAREDCO) and the Confederation of Real Estate Developers' Associations of India (CREDAI) have joined Project NIPUN as industry partners and will identify training job roles of aspirational value in the construction sector in collaboration with the SSC